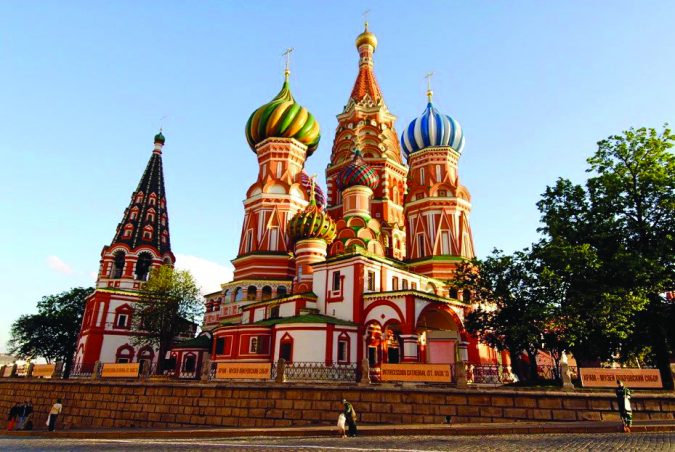 Is the Iron Curtain making a return in Russia today with the government’s increased crackdown on religious minorities, including evangelicals and foreign missionaries?

Controversial Russian President Vladimir Putin signed a package of laws in July 2016 that included the most repressive legislation since the start of the purge of religious minorities to varying degrees by the former atheistic Soviet Union government in 1921. The laws are often referred to as the “Yarovaya Laws.”

The package includes a particularly chilling measure, especially for evangelical Protestants and others who actively share their faith. The new measure makes it a crime to engage in religious activities that range from preaching and teaching to religious publishing, anywhere in Russia except government-approved sites. Although the laws were passed under the pretext of fighting terrorism, human rights organizations say they are really anti-religion or anti-missionary bills. A Russian church. The new “Yarovaya Laws” make it a crime to engage in religious activities that range from preaching and teaching to religious publishing, anywhere in Russia except government-approved sites. Photo courtesy missioneurasia.org

Sergey Rakhuba, president of Wheaton, Ill.-based Mission Eurasia (https://missioneurasia.org), which reaches out to Christians in Russia and neighboring countries, called the law “the most draconian anti-religion bill to be proposed in Russia since Nikita Khrushchev promised to eliminate Christianity in the Soviet Union.” After Putin signed the package into law, the U.S. Commission on International Religious Freedom (USCIRF) condemned its enactment.

Earlier this year the USCIRF, which flags religious freedom violators for the State Department, listed Russia among the six new Tier 1 Countries of Particular Concern (CPC) in its annual report. It is the first time in the commission’s almost 20-year history that Russia has made the list. A total of 16 countries hold the CPC designation, including Russia. They are North Korea, China, Burma, Iran, Pakistan, Saudi Arabia, Sudan, Tajikistan, Turkmenistan, Uzbekistan, Nigeria, Syria, Central African Republic, Eritrea, and Vietnam. In January Open Doors, an international agency that supports persecuted Christians in 60 countries, placed Russia No. 57 on its Watch List of the worst persecutors of believers.

Unfortunately, this is hardly the first attempt during the Putin era to equate peaceful religious behavior with terrorism or extremism, according to USCIRF. For nearly a decade, Russian authorities have targeted innocent people of faith by employing an anti-extremism law against them that requires neither using nor advocating violence for actions to be labeled “extremism.”

In April, in a decision which might have ramifications for other religious groups, Russia’s Supreme Court formally banned Jehovah’s Witnesses as an extremist organization and ordered the state to seize its property in Russia. The court, after six days of hearings, ordered the closing of the group’s Russian headquarters and its 395 local chapters. The Interfax news agency quoted Justice Ministry attorney Svetlana Borisova as saying the Jehovah’s Witnesses pose a threat to Russians.

Rakhuba says the new laws have put increased pressure on evangelical Christians. “Because of increasing religious persecution in Russia rooted in nationalism and the close union of the government and the Russian Orthodox Church, evangelical Christians in Russia are soberly considering what a faithful Christian witness looks like in these challenging and dangerous times. Any Christian — or other religious minorities — not connected with the Orthodox Church are being targeted by overzealous anti-terrorism laws, under the guise of keeping the country safe. But in fact, these anti-terrorism laws are only hurting peaceful churches and not hindering actual terrorists. A baptism in Russia. The new measure has been called “the most draconian anti-religion bill to be proposed in Russia since Nikita Khrushchev promised to eliminate Christianity in the Soviet Union.” Photo courtesy missioneurasia.org

“But we do not lose hope. Even after several years of freedom, the evangelical church in Russia has not forgotten how it was persecuted during the Soviet regime, and they are prepared to face the coming persecution with the same faithfulness and courage as the underground church during Soviet rule. We know that the Great Commission is not just a command during times of freedom, and the gospel will not be stopped by the rulers and powers of this world.”

Rakhuba adds that Mission Eurasia, as well as other ministries, are standing in the gap for our fellow followers of Christ in Russia. “Even as Russia is closing its doors to foreign missionaries, we are seeing faithful Christian leaders in Russia stepping up to carry the torch of the gospel. Mission Eurasia focuses on identifying and training young Next Generation Christian leaders in Russia and Eurasia who are brave, eager, faithful, biblically trained, and well-equipped to continue to advance God’s Kingdom — even under persecution.

“These national leaders, trained by Mission Eurasia, are able to do ministry in places in Russia that are now closed off to foreigners. Please pray for these faithful Christians in Russia — and the entire evangelical church in Russia — as they seek God’s wisdom and grace in responding to these serious new challenges.”

First Missionary Prosecuted By ‘Yarovaya Laws’ Back In States

Independent Baptist missionaries Donald and Ruth Ossewaarde are back in the United States. They are the first victims of the Russia’s “Yarovaya Laws,” which were approved by President Vladimir Putin’s restrictive government in July 2016.

The Ossewaardes, who had lived in Oryol (220 miles south of Moscow), received a visit from three policemen on the morning of Sun., Aug. 14, 2016 as they conducted a church service. They requested that the police wait until the service was finished. They then were driven to the local police station. Don Ossewaarde was charged and taken straight to court. He was declared “guilty” two hours later. Don and Ruth Ossewaarde are the first victims of the Russia’s “Yarovaya Laws,” which were approved by President Vladimir Putin’s restrictive government in July 2016. Photo courtesy missioneurasia.org

Don Ossewaarde, who with his wife had lived and ministered in Oryol for 14 years, was fined $640 for holding religious services at home and allegedly advertising them on the bulletin boards of nearby housing blocks. The judge said Ossewaarde’s guilt was “fully proven since he carried out missionary activity without submitting prior notice in writing of the beginning of the religious group’s activity.”

But Ossewaarde said he wasn’t part of a religious group, while the law allows for “worship services, religious rites, and ceremonies” to be conducted at home. He also denied advertising the meetings on bulletin boards and said he only gave out leaflets by hand. He has exhausted all of his appeals in Russia, the latest this spring, but said, “It is my duty to press the case as far as I can. My lawyer assured me that this case will play an important role in determining the future of religious freedom in Russia, not just for foreign missionaries, but also for ordinary Russian believers.”

Ossewaarde, who still has an appeal to the European Court of Human Rights although that might take a few years for a decision, added that his court-appointed lawyer had advised the couple to leave Oryol “because anything might happen to him and his family.” He bought a one-way ticket to Chicago in early May. His wife left Russia earlier.

The Ossewaardes are not the only Christians to have fallen afoul of the new law over the last year. Forum 18 News Service (www.forum18.org) reported prosecutions are continuing across Russia under restrictions on sharing beliefs. Forum 18 reported a Protestant pastor from India was deported in February.